The Biggest Problem With Writing — And How To Beat It 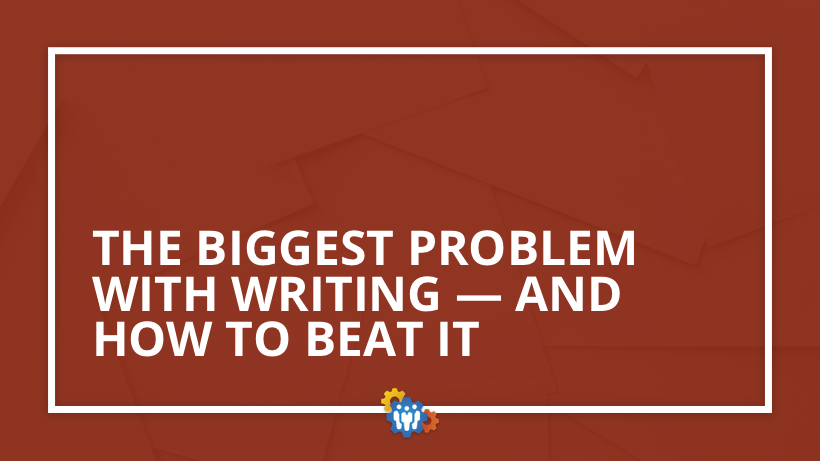 When you have weight in somebody’s life — and when that weight causes you connect with that person — that’s called “rapport”.

By far, the BEST way to create rapport is in a live, person-to-person setting.

You see, we tend to determine if we’re going to grant rapport on two different levels: verbal and non-verbal.

When you’re with somebody you can see what their facial expressions are like. You can hear what the intonation is in their voice. You can see their body posture…

You can read them, smell them, hear them, touch them — and you can develop rapport very rapidly because you’re triggering all the different senses. In this way, you’re creating this similarity or this connectivity that leads to them liking you and you liking them. You’re showing them that they should be like you or invoking in them a desire to be similar to you.

In a live setting, I’m not going to say it’s easy… but it’s a LOT easier to make these kind of connections. ?

If rapport is developed through these five senses that we have…

…if it is invoked through the verbal and non-verbal communication…

…then how do we do that as Writers?!

How do we create instant rapport with somebody as a writer so that they will take the action that we want them to take? Whether it’s to think a certain way… to feel a certain way… buy a certain thing… whatever.

If you’ve seen the movie The Polar Express, you’ll remember this scene: they take the train down to the gulch, they gotta strap on right to the front grill and you’re coming up over the edge.

All of a sudden — WHOOSH — you plow down the hill!

But what does your stomach do when you watch that?

Well if you’re like me, what happens is your whole gut goes right up in your throat just like you’re on the roller coaster!

Well, why is that?

They rehearse their scripts. They practice out the details.

He would get it perfect.

Then he would go out and physically invoke it to create physical muscle memory. A lot of it was already there because he had imagined it.

This, then, is the number two way, to create great rapport in writing. You invoke imagination.

Now, if nothing else makes you want to learn the art of invoking the imagination in your writing, here’s the reason why you want to do it:

If you can get your prospect imagining an experience, thinking something very clearly with intense emotions toward it…

You are well on your way to helping them actually make that imagined state become their reality.

Here’s part of a song called “Pure Imagination” from Willy Wonka and the Chocolate Factory that’s truer than you may have ever thought:

If you want to view paradise
Simply look around and view it.
Anything you want to, do it.
Want to change the world?
There’s nothing to it.

If they connect emotionally, through an imagined experience, with what you have to offer, their subconscious mind will begin to take the steps necessary to bring that experience into reality.

So do this… invoke their imagination toward the product or service, and watch as they come a-knockin’. Or apply this concept to the experience you want to have with your clients, and then live it.

Just remember, the more REAL an imagined experience feels, the more easily it will become reality.