3 Ways To Build Your Words Into Trust With Your Prospect 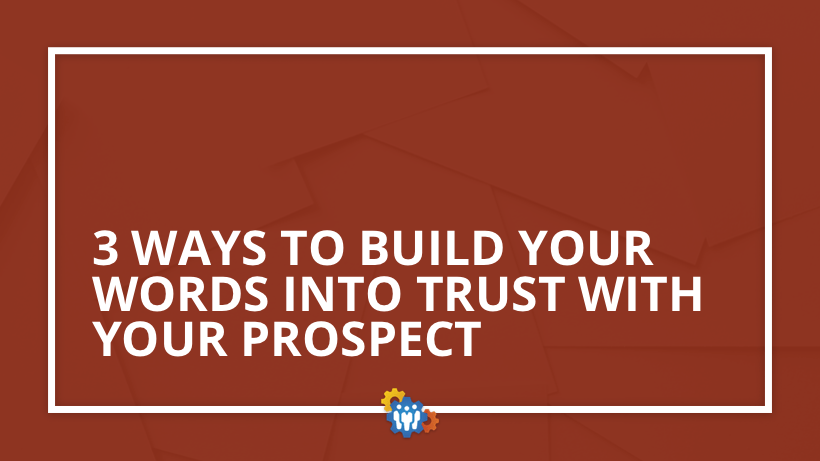 Words are at once useful and confusing. One word can be used a thousand different ways to express 10,000 different meanings. And its interpretation all depends on the person you’re talking to.

Here are some examples:

What’s the difference between the words of an Englishman and those of an American?

Or between a Shakespearean actor’s words and a modern action film star’s?

Or what about those of a college lecturer compared to Dr. Martin Luther King, Jr.?

As a writer, it’s extremely important to use words that connect with your audience — in the way that you want them to.

Let’s refer back to the first question I asked…

I’m an American. I speak English. So do some of my friends in Great Britain. But do we speak the same language?

Sure we can understand each other, but that deep connection happens when you look at not just the words they’re using, but the way that they’re using those words. You’ve got to be able to understand what’s going on inside somebody’s mind and what the nuances are of what it means, and then use it in that way.

Now how do you do that?

The only way I know how to do that is to really step into their world and become part of it for a little while.

Years ago I had an opportunity to write for a company called AutoTap.

They make this little computer that plugs into your car and it gives you a readout of what kind of gas mileage you’re using, what are the error codes, how your system is firing, and cylinders, and all that kind of stuff.

It tells you all about your engine.

Well, the main buyer of this are geeked-out people who love, love, love cars! Classic cars that they’ve added computer chips to or new cars that they’re trying to “juice up” and “pimp out”.

I started to go to car clubs and I started reading their stuff.

I just planted myself in their world for a while and I listened to the way that they talked about stuff. Like this phrase — they “pimped out their car”.

They’re pimping out their cars!!

Well, I’d never used that expression in my whole life… but when I wrote the copy for AutoTap, I spoke their language.

I talked to them. We talked about what that meant. And it sold very, very well because I was speaking their language.

Remember the second question I asked at the beginning of this article? What’s the difference between a Shakespearean actor’s words and a modern action film star’s?

The difference is in their intonation.

The Shakespearean may say the same words as the action film star, but you know it’s gonna be extremely exaggerated and over-the-top, whereas the other actor will usually be pretty serious, tough, and standoffish.

Someone that I admire and respect is a gal named Marianne Williamson. She wrote something called “Our Deepest Fear”. Here’s the first sentence from that quote, “intoned” as I would say it.

Now here’s the way I would intonate the way that Marianne Williamson, herself, reads this quote.

“…is not that we are inadequate.

“…is that we are powerful…

What you can see there is different expressions of voice.

My voice tends to be very hyped up and animated, as you can probably tell. ?

Marianne Williamson is calm, and centered, and relaxed. Right?

We can see these differences in intonation in print through bad grammar, indentations, paragraph breaks, bolds, underlines, and all the dot-dot-dot stuff.

When someone reads that, they can see where to put the emphasis, versus if you just wrote those two sentences out.

Without them, they would read it and pull in the intonations from their own head — and that may or may not resonate with them. If they weren’t familiar with it and hadn’t read it before, then maybe they wouldn’t put emphasis on it.

Sometimes this requires really bad grammar and formatting that drives editors bonkers but it’s okay… because when they read it, you’re creating trust.

Have you ever been to college!!

I mean, I suppose high school will do. But compare how you felt in those classes to when you heard one of Dr. King’s speeches. Radically different feeling!

So, the point here is to connect to our readers using shared emotionally-charged expressions.

Again, this requires you to be a sort of insider to know what’s going on in their heads and what those words mean to them.

As a very silly example, I was a kid in the early 80s and I loved watching cartoons.

One of my very favorites was Thundercats!

If you have ever seen Thundercats you know it starts off with this red beam streaking through the universe, coming down and looping around the Earth, and then shooting up and hitting the middle of Lion-O’s massive sword with the big red cat-eye in it.

Then he says, “Thunder!”, and he strikes his sword.

Then he holds it out and he shouts, “Thundercats Ho!”

All the other Thundercats stop. And then they use their magical powers to come save Lion-O, and then everybody’s happy!

It’s this little expression that revs you up, it makes you feel powerful, and courageous, and fearless, and invincible…

It feels like you’re there, with the other Thundercats, saving the world!

Now, some say that you should not use trite expressions.

I agree with that, but I also think that you should use expressions that are emotionally charged for people and in a way that they respond to. It allows you to reach in there and make connections with them that nobody else could except for a real insider.

That develops trust. They see, “Oh my goodness, this person’s like me and they connect with me.”

Use their language, intonations, and shared expressions. These things build trust.

What I want you to do now is think about a writing assignment that you have, whether it’s to build out your own information packet, your own website content, your own blog, or something for a client…

Then think about these three things, pick one of these techniques, and put it to use in your copy.

I think you’ll find that it makes an amazing, huge difference.